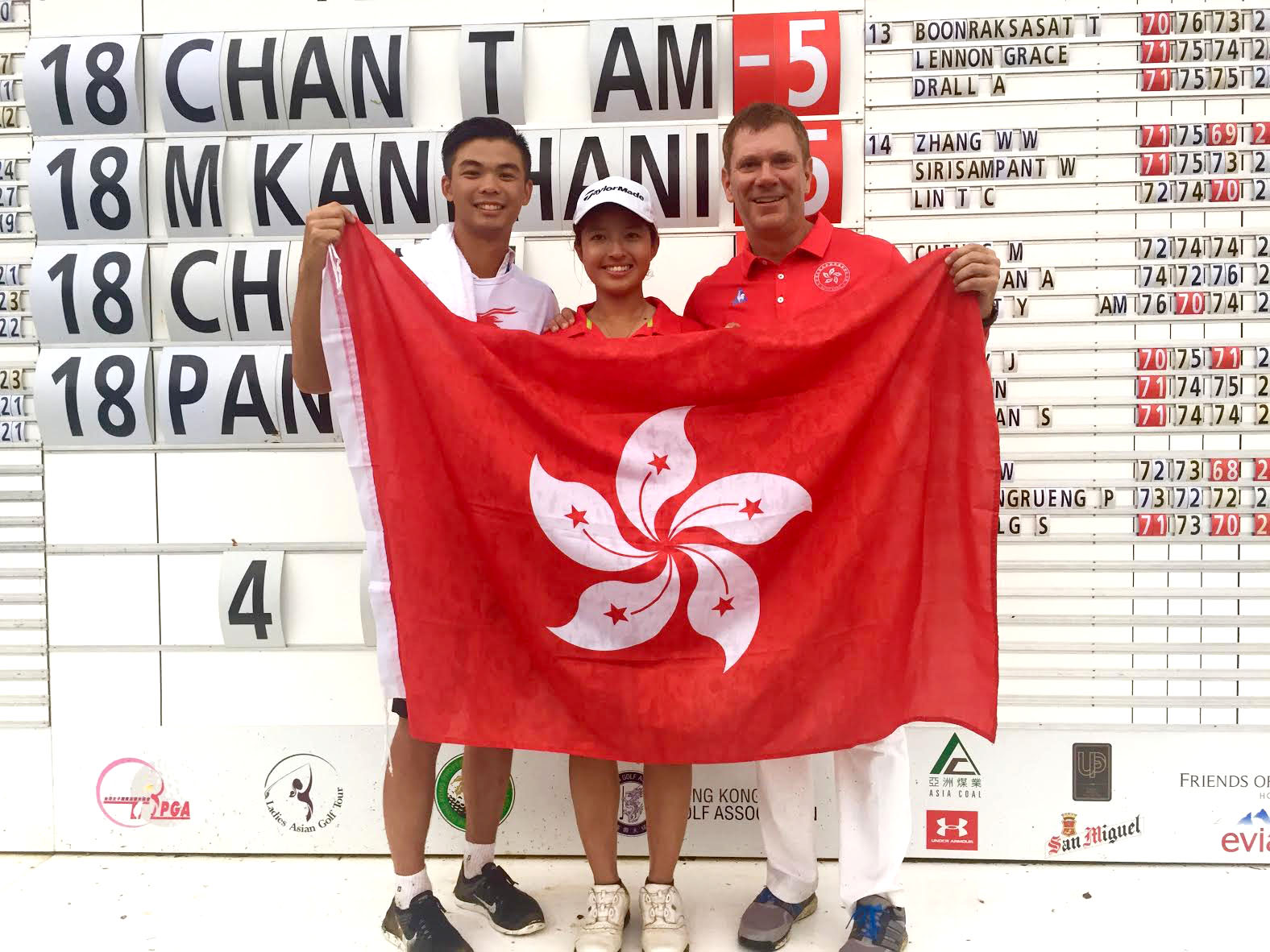 Posted at 02:10h in Golf by Philippa 0 Comments
0 Likes
Share

Feature photo taken at the Hong Kong Ladies Open 2016 at HKGA with the Champion Tiffany Chan and her caddy Steven Lam.

I started playing golf by following my brother to the golf course when I was about 7 years old back in my hometown in Washington, USA. He was introduced to golf by a family friend and we both got really into it. I played throughout my high school career and then at my local college. My brother moved to Southern California to play small professional tours and tried to get on to the PGA Tour. Again, I followed him to start working and playing down at Palm springs, which provided much better weather conditions and courses.
Once I arrived in Palm Springs, I started working at the golf digest schools, which was the best at that time with premier golf coaches. I met Jim Flick, who started his own programme called the Nicholas Flick Schools. I moved overseas to Hong Kong and had the opportunity to run my own academy as part of the Nicholas Flick schools and at the same time played in the HKPGA events and a few Asian Tour events.

Unfortunately, the school succumbed to the asian economic crisis in 2000, which led to me doing some freelance coaching with good level players for a few years. It was this change that brought me to a new opportunity with Nicky Au from the Hong Kong Golf Association (HKGA). He approached me to coach 8 kids and that’s how we got started with the junior programme. This developed into 4 classes of 8 kids and continued to grow from there. When Nicky Au left HKGA, I was asked to take over and become the Head of Junior Golf in Hong Kong.

2. How different is Hong Kong compared to the golf culture in America?

The main difference was the accessibility. In Hong Kong, there was only one public course out in Sai Kung and it would take over an hour to get there and back, which, including the warm up would turn into a whole day affair. Whereas in America, courses are abundant and playing doesn’t have to take up the whole day.

Also, education plays a big part in the way golf is played over here. Local students have insane demands from schools, that’s why sports in general suffers. Physical education is only taught once a week over here, but in America, it is integrated within the school curriculum on a daily basis.

3. Were there any challenges of transitioning from a player to a coach?

The biggest challenge was the loss of competitiveness on the course and not being able to play with others. Nonetheless, I became entrenched in the kids’ performance, and I live vicariously through them. I take a lot of personal satisfaction when kids I coach start playing better and better.

4. When you go away with the kids to play in tournaments, what is the schedule like?

For most tournaments, we travel for about a week as the event usually lasts three days, with training lasting for about two days. However, we will plan to travel for longer over the summer in order to build a tour around the junior world championships. Since the weather is quite poor in Hong Kong, we try to play tournaments before and after, so that the elite players can come back to their top form in the fall. Thankfully, most of the tournament calendars come out a year in advance, so we can maximise the time when the junior golfers are not in school.

5. Can you please tell us more about the junior golf programme in Hong Kong?

It started in 2003, when Nick Au approached me to train a group of 8 talented young individuals. The programme grew when we started hosting talent identification days, whereby we judge kids around Hong Kong on their performance and technique with the aim of further developing their skills. These scouted kids would be given access to coaching and physical training. Now, our main focus has turned to selecting players for their tournament ability, as they will be able to play better under pressure.

Our training regime facilitates competitive performance through a lot of games for the players to harness their skills under pressure.

6. What is your vision for the development of junior golf in Hong Kong? What would you suggest as improvements, if needed?

In terms of the education system itself, there is not much I can do. The inclusion of sports schools perhaps would be ideal, whereby the kids cover their core subjects and pursue their sport on the side. Also, we want to push young and aspiring athletes to pursue their sports in the best university abroad. This way they are able to get a top education, whilst rigorously playing the sports, which parents will buy into. This will set up a lot of young players to play in professional tournaments.

7. Do players usually come back after going to university?
Yes, it is great to see the kids return after completing their education and compete in both team and individual tournaments locally and regionally.

8. How would a good young player, who is interested in the sport, get into the national junior development program?

Initially to scout a player, we use a performance based identification system. The kids will need to play tournaments, so we can see if they have the right skills under pressure. If they display good potential, we will scout them and get them into a development programme.

In conjunction, we have local golf schools, such as the HSBC golf school that has been very beneficial. The players will join on their own and be guided to play in tournaments to become more prominent on the local stage, which is also an opportunity for them to be scouted by us to join the development programme.

9. How did you get involved with Pinnacle?

We were introduced to Pinnacle Performance, a strength and conditioning fitness gym, through a father of one of the players. He was involved at Harrow International School, and Pinnacle was doing basic movement workers with the younger kids over there. I liked that concept and wanted the kids to learn as early as possible, so they can learn the importance of body mechanics as soon as possible.

The relationship started off with a 3-4 month trial and it turned into a very beneficial relationship. Now, we do three classes a week at Pinnacle, with the possibility of developing one more. We align the players based on their age and ability, so that they have the social component of training and become more motivated to work hard. Ultimately, this brings the team closer together.

10. How important is physiotherapy within the sport, especially for young players looking to develop their game?

Previously, physiotherapy has been very useful in helping players solve existing injuries. Over the years, it has now developed into becoming more focused on prevention and identification of injuries at an early stage rather than healing them after.

This is why Pinnacle Performance has been very effective. We try to get kids to train as early as possible, so that by the time they turn 25-30, they are not plagued with injuries. An example would be young girls, who start their career by being very hyper mobile in their back, but don’t use enough core strength making them prone to injuries in the future. Through Pinnacle’s training, they have much better technique and form.